About two hours out from the Dallas-Forth Worth metroplex, and around 03/18/20 01:30 CST, Sarmad Wahab was found. We don't know the details of the location he was found. At around 03:19 CST, he was successfuly dispatched into a hospital. He had been missing since 02/14/20 17:47 CST. Approximately six weeks. Some were unaware that he was alive from dissasociating with the situation, we had confirmed he was alive and had faked suicide to run away from home. He was successfully found six weeks later.

You can contact him at his Discord, bin#0160. He seems to have regained a sense of his memories, and is also now home. He has been ignoring most things for a while now, but his status indicates that he is active on his computer.

His number is +1 716 817 4330. The Google Form managed by his father is still available, to send him a message. He actively monitors his email at [email protected]. His father expressed that he's sure that Sarmad would like to recieve letters, and that he'll ensure they're delivered to him. He did send most of us stamps, so we can just use those, no need to pay.

, but is currently very disturbed by the events that have happened very suddenly for him. Please be mindful of that when texting him, and be mindful of the entire situation from his end. We know that we're all upset about the situation but so is he. You also shouldn't expect a response immediately.

His father & his NamUs report that his since been updated: 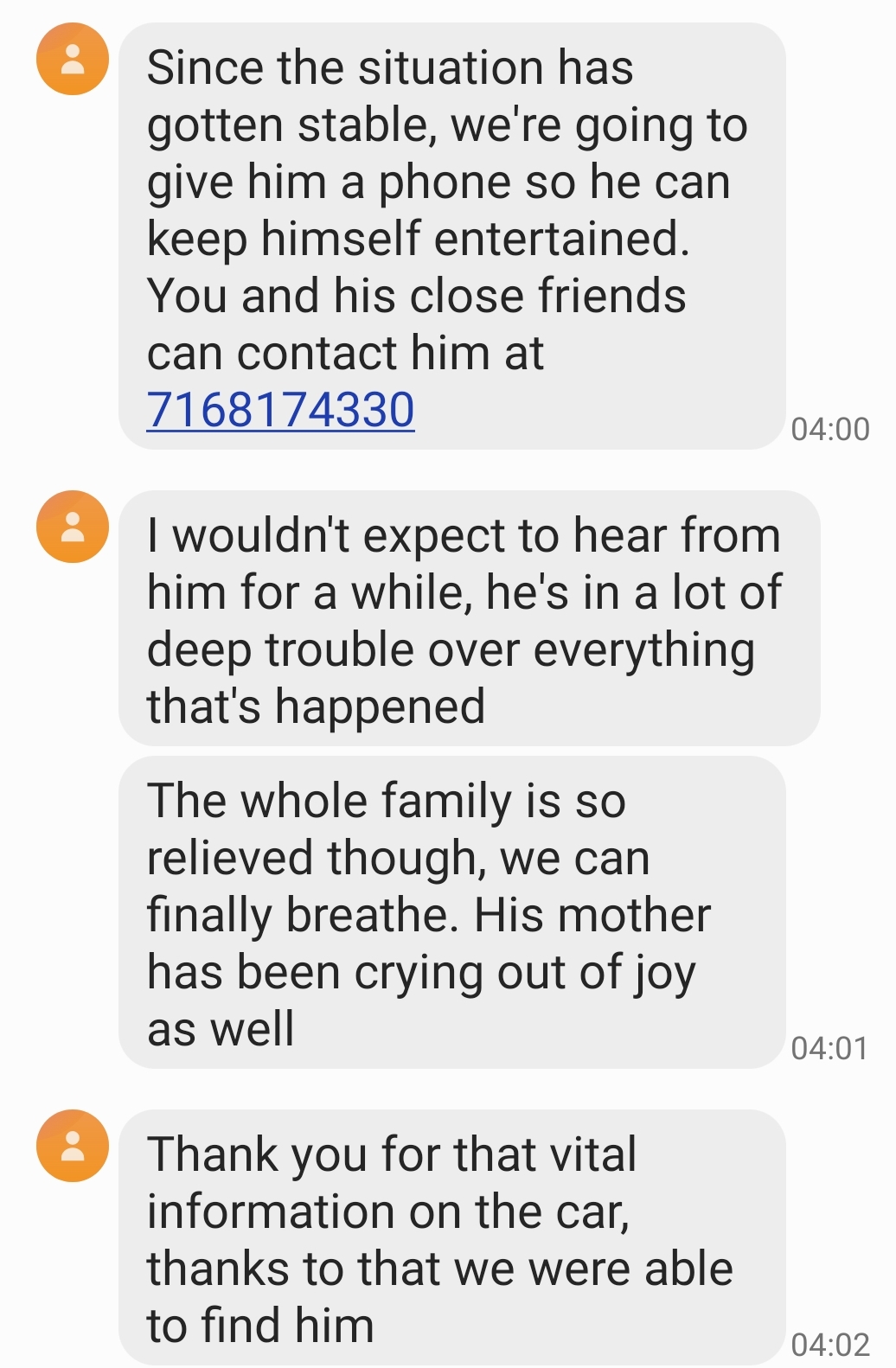 Where is he now?

He's now resting at home, safe, and his family is watching over him. His memory seems to have returned for the most part but seems to avoid talking. He's also regularly going to therapy, we don't know when but it seems like he gets on Discord around 4PM his time. His school is cancelled so we really don't know what he's up to before then.

help him / his body / his brain feel comfortable with befriending us again, and helping him through the pain that he's enduring right now. we all know he's safe & sound right now.

How was he found?

Let's call a certain girl Alice. She was a very close friend of Sarmad for the past four years. She would like her identity kept private though most of you know who she is by now. She's the hero of this entire situation right now.

After the poster coordinates were revealed, Alice had asked one of her friends to go to the poster and send a picture. Let's call that friend Jack. Jack was trying to find one of bin's posters (for his challenge). Jack was trying to take a picture of the poster when Sarmad jumped out at them, squatting, asking them to mute the Discord call. Jack spoke with Sarmad for a short while, before immediately informing Alice. Alice had informed the others, who informed the father and the police. The police looked at CCTV cameras and found the car he was driving with, and using the number from the poster, found his location. It was about two hours away from the edge of Dallas. Jack provided information about the car he was in, a tan Toyota Corolla from 2006-2008, his clothing, and appearance.

This story, the most logical and believable one, caught police attention and they immediately began to investigate the suspected location. To attempt stalling Sarmad from going anywhere, Kot sent a message in the Discord, revealing a virtual number he was using (see below how we got this number), and asked everybody to try and message him. This plan worked.

How did we get this number? It seemed he was trying to contact anybody who tried texting the numbers on the poster, using his virtual number. Some of us spoke with him for a while, and it seemed his memory had been repressed / he forced himself to not remember. Alice made contact with him for a while before we decided to get everybody to try and jog his memory, and to stall his location.

During the stalling, Alice had called Sarmad on the phone, along with Kot on Discord, and they both listened to him and asked Sarmad various questions for a short while to stall him until the police arrived.

Many people texted him and it seems he had repressed his memory, and with little recollection of things. Referencing to things such as his notes or diary for details on what had happened. His memory seemed to revert to before Yara, or Spring 2017. According to Shiro, he had remembered things before he got hurt by a "girl" named HotShotQQ, which he liked at the time. He seems to remember xenomus and Shiro as well from back then, and Shiro as Senpai. He seems to remember Megumin as "the fake egirl who Kuroi tried baiting me with." We don't know who Kuroi is.

Whatever happened to Malaysia?

Malaysia was a lie, and false proof made up by Sarmad. He had bought all those supplies and shipping contianers, including VPNs to make it look like he was in Malaysia, and had done his research in advance to make his story believable. This same principal was used with his other false leads, e.g. the COVID-19 note left behind by him, and other lies. He had spread around misinformation to throw us off and make the police investigation harder. He really did not intend on being found. See below for more information.

What about the letters?

Although Sarmad seems to have accepted that he created the letters, he seems to have little recollection of them, and in fact even made fun of his own letter to Amelija, and refused to accept it as his own. He had claimed it was made by an "r/niceguy and incel" which seems to show he's not aware of the word "simp." This further adds onto the theory that he has repressed his memories out of trauma.

Either way, Sarmad wrote those letters, and he did mean all of the things he said to us, and we believe you should cherish them. We have confirmed that the blood on those letters was real, according to the color, and just extent of the situation. To add onto it, Shiro had confirmed it was human blood through a lab analysis, and some users had watched Sarmad pour the blood on the letters live.

His father and Sarmad wanted to be written back to, so we believe you should write back. While it may seem troublesome, he had written a letter to you, and it only costs 55 cents to send a letter in the Continental US. It costs about a dollar to two dollars from anywhere else in the world. We'll post his address here, since most of the world knows it already, and it's pinned on his twitter.

It seems The Council was just a few dudes messing around. They had contact with Evan and claimed they were getting paid by Sarmad. After Sarmad was found they had revealed their names to us, and confirmed that The Council names were just codenames, and that Milly/Leila didn't really exist. There were no girls on The Council.

We haven't heard from The Council since the incident, with very little / vague occasional texts. It seems pretty certain they are trying to disconnect from the situation.

What about the ARG or game?

We can't really finish it without The Council revealing what was in the UK posters. Some say they don't want to finish it or they have no reason to do it. We won't really know what's at the end unless Sarmad manages to remember / gains access to his source code. With that maybe we'll be able to finish or find the end, until then it's more of a waiting game.

A few users were aware that Sarmad never escaped to Malaysia. A list of these people are: Evan, Kot, Snek, Mxholland, Kazu, and Andreas. These people went along with his story for various reasons, some of which had concrete proof he wasn't in Malaysia, and some of which who just assumed he wasn't. Sarmad had also impersonated some people to send his own father false information.

While these people were also unaware of the severity of the situation, they wanted to avoid leaking information because Sarmad was in the process of self harm, and they were aware of this, and wanted to avoid hurting him / preventing him from taking it further. He had expressed that he "doesn't care if it gets out, at this point I'm gone and it won't matter to them, still alive or not, I'll be dead to the very people that hurt me." These people aren't to blame and you shouldn't send harassment towards them.

Furthermore, this document was written in 3rd person perspective, whilist minimalizing as much bias as we could, and keeping information truthful and straightforward. This entire situation had been planned out by Sarmad, including the game, to give him more time to run away, and in the process forced himself to suffer more. That's the simplest way we can understand what has happened over the past six weeks. If you have anything you'd like to add, please tell us and we'll see if it's worthwhile adding here. We plan on doing a writeup of the rest of the situation soon.